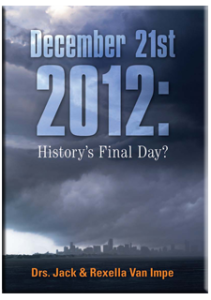 Available on DVD and VHS

Could various cultural and secular sources be right about earth’s final day?

Do these prophecies from all over the world correspond with the truth of God’s Word? In their exciting video teaching, Drs. Jack and Rexella Van Impe demonstrate the very real possibility that 2012 could be a year of culmination – could December 21st 2012 be history’s final day?