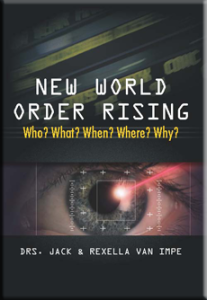 You and your family may live to see the new world order – which is also the last Bible prophecy to be fulfilled before the return of the Savior Jesus Christ!

For centuries, shadow groups like the Illuminati, and more recent groups, such as the Bilderbergs, have planned for how to ring about a one-world government.

U.S. President Barak Obama has been elected at a
unique moment in history that could allow him to
create this new world order!

In this video teaching, Drs. Jack and Rexella Van Impe show you the biblical foundation for this coming one-world government, document the great strides that have been made toward it through the European Union, and explain how the critical years from 2012 – 2019 could be the rapidly approaching time-frame for the return of Jesus Christ.