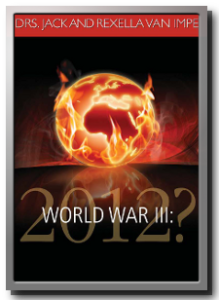 Available on DVD and VHS

Could Armageddon take place as soon as 2012? What events must come to pass before the final epic battle? And most importantly: how can you be assured that you and your family will be safe?

Drs. Jack and Rexella Van Impe give you all the facts in this thrilling video teaching so that you’ll have a complete biblical overview of World War III, how soon it could take place, what the results will be, and much more.

In this video you will learn: